It was through the generosity of Madame Camile Marguerite De Poorter and the McGill brothers, Arthur and Felix, that the present chapel was erected. The cornerstone was blessed on January 29, 1894.

Architect and designer of the chapel was Harrod and Andy of New Orleans. The architecture is Romanesque Revival and it is built of rusticated stone. The base is of Georgia granite.

The sanctuary lamp is the work of the Paris goldsmith Armand Callat.

The Carrara marble altar has been adapted to meet the most recent liturgical requirements. The altar of sacrifice in the center of the sanctuary, the tabernacle altar, the president's chair, and the lectern were assembled from pieces taken from the original altar.

The stained glass rose window in the ceiling of the sanctuary was in the original design of the chapel. The various stained glass windows in the nave chapel were donated by benefactors of the convent. The windows at the back of the chapel, depicting the Holy Family, St. Martin de Porres, and St. Peter Claver were transferred from the former St. Martin de Porres Hospital.

Groups of statuary ornamenting the niches were added several years after the chapel was built. One represents the Agony in the Garden and the other, the apparition of the Sacred Heart to St. Margaret Mary. The paintings over the grates and altar represent, moving from left to right, St. Dominic, St. Francis of Assisi, St. Augustine, St. Francis de Sales (founder of the Visitation order), St. Peter and St. Paul.

The crucifix above the presidents chair was in the chapel when it was destroyed by fire in 1854. In the midst of the fire, Dr. Samuel Mordecai, a Jewish friend, climbed the grill work in the chapel and rescued it.

The crypt contains a small Carrera marble altar and statue of the Angel of Death. Dr. De Poorter and Madam de Poorter, as well as the McGill family, are buried in the crypt. 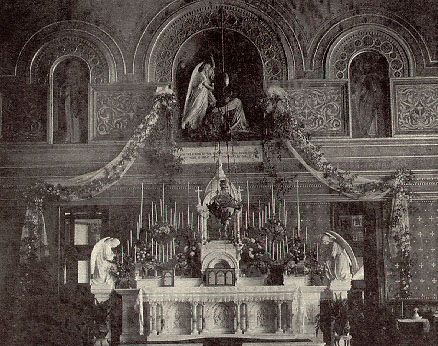